Hesse hitting all the right notes 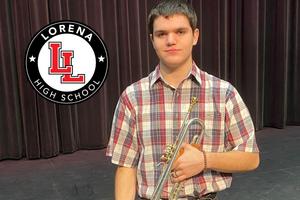 Lorena junior trumpet player Cameron Hesse earned a spot in the Association of Texas Small School Bands All-State Concert Band. He is the first Leopard to be named to an All-State Band since 2018. Hesse advanced through regional and area round competitions to make the All-State Band.


This is Hesse’s first year at Lorena High School but the second time he has made the ATSSB All-State Concert Band. Last year he received All-State recognition as a sophomore at Bushland High School. “It’s amazing because I know what happens at All-State, and it’s just so much fun to get to go,” said Heese.

Texas Music Educators Association Clinic/Convention. The group will start rehearsals on February 8. The ATSSB All-State Concert Band will perform on February 11 at the Lila Cockrell Theatre in the Henry B. Gonzalez Convention Center.